Delhi Public School Ghaziabad was conceived and founded by Mr. Om Pathak, the then District Magistrate of Ghaziabad in 1980 with support from Sh. Dharamvira and Lt. Colonel Dr. GPS Waraich, the then Principal of DPS, Mathura Road.

The school commenced operations in a hired building in Raj Nagar on the 5th September, 1980. The foundation stone of the new building was laid by Sh. Dharamvira, on the 19th of April, 1981 and soon thereafter, the school shifted to its present locale. The school has made steady progress over the past 40 years. Since its affiliation to the CBSE in 1985, 31 batches of class XII have passed through the portals of the school.

A Brief Descriptor of The School

Delhi Public School Ghaziabad, a premier English medium co-educational institution of Western Uttar Pradesh is situated on the Delhi-Meerut Highway. A sprawling lush green locale of 15 acres of this 40 year old school provides an environment that is conducive to meet the intellectual pursuits and holistic development of nearly 6000 students who come here to study, to build, to dream, to find their bearing and to blossom into balanced and responsible citizens of whom any country would feel proud. It is a path breaker in pursuit of excellence.

The majestic red brick building with its large playing fields have been the training grounds where generations of youngsters have learned, played, cheered, won and lost many a game

The school provides state of the art infrastructure and facilities to the students like basketball courts and playgrounds that meet international standards. Our school has hosted and our students have enthusiastically participated in all sports events like Cluster as well as other skating and swimming competitions held by CBSE.

The school has huge fully airconditioned auditoriums equipped with all facilities for dance, theatre and other literary functions. It also has a Stadia & Amphitheatre for conducting assemblies, functions etc.

The school is divided into four separate wings which function efficiently and competently under the able leadership of four Head Mistresses. The teaching and the non- teaching staff allocated to each wing report directly to their respective Heads. This clear distribution of authority and responsibility not only gives structure to the school's functionality but also gives it an impetus to run smoothly. 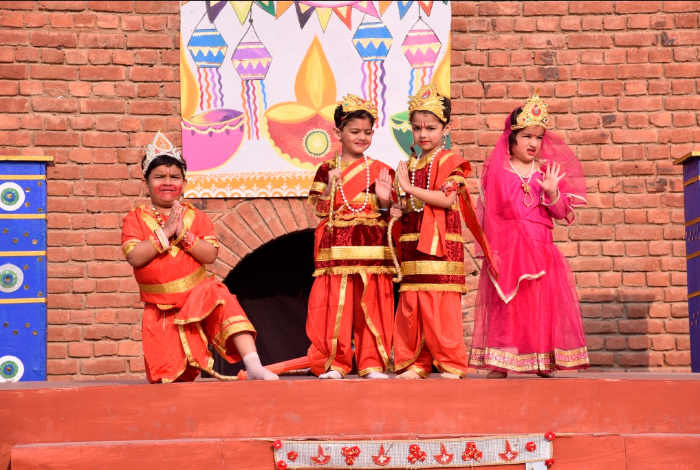